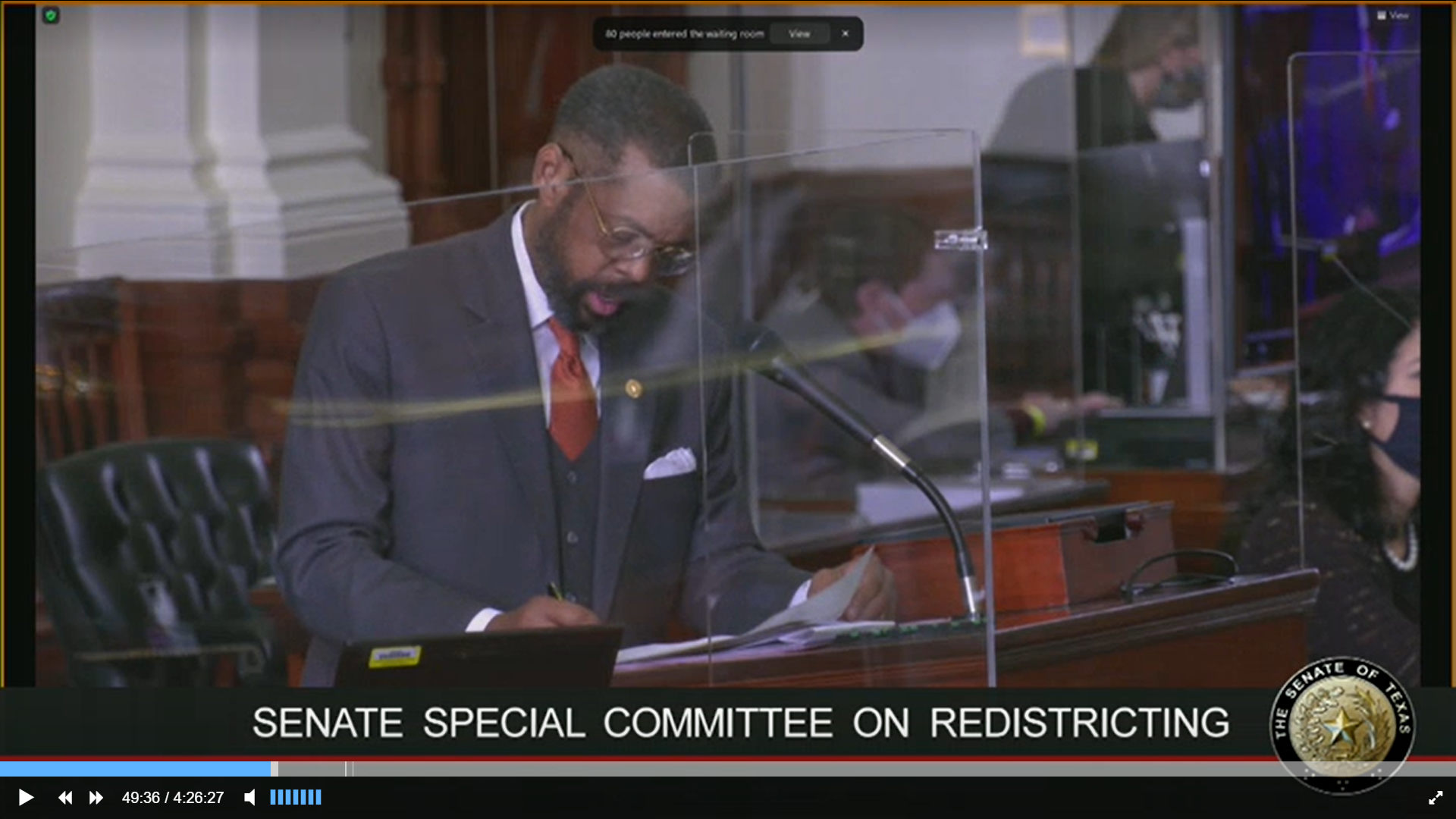 I apologize that I haven’t posted anything in about a year because, you know, pandemic. I’ll catch up on what I’ve been doing later but I wanted to drop a note that I’m back at it.

I got an email from Fair Vote today encouraging us to write our state legislators and ask them to support some bills on ranked-choice voting. I ended up abandoning their form and sending my personal messages through the legislators’ forms.

Then I clicked over and found the redistricting committee information. I figured I should write to them too. Then, because it was so well written 😉, I thought I should post it here too. The rest of what follows is what I just sent them. It’s now part of the public record.

I’m a veteran, a scholar, and a resident of the Dallas metro area. Part of my doctoral research was on representation and public engagement.

I’ve been watching some of the public testimony regarding redistricting. It appears most people are against gerrymandering, as you would expect and hope.

I appreciate the structural incentives for legislators are against drawing fair maps. Texas’ map went to the Supreme Court, and the case was rejected because it’s apparently too hard of a problem to adjudicate.

While the public is by and large against gerrymandering, there appear to be no long-term personal negative consequences for legislators doing it. Their parties encourage it. The public hates it but can’t do anything to stop it. This has been going on for as long as people have drawn maps.

The arguments for fairness and representation have been numerous and ought to be convincing enough in themselves.

Since we’ve continued to see gerrymandering decade after decade, I’m not optimistic that we’ll see any changes in the future based on those arguments alone. They’ve been made over and over while things only seem to get worse.

As an alternative, I’d like to appeal to legislators’ self-interest. We’ve seen how political tides and fortunes can change – twice now in the last two national elections. Gerrymandering can only stave off such changes for so long. Continuing to pursue additional gerrymandering often ends up backfiring.

Instead, I’d like to suggest the map be drawn in as fair as possible for legislators’ self-interested reasons.

Those could be to set a precedent so that when the inevitable change in power comes, behavior and rules are in place so that the new minority party can maintain a representative hold on their former power.

This isn’t the same as installing partisan judges for life. The map will be redrawn again every decade. The worse the gerrymandering, the more justification the other party will have to overcorrect.

If the majority party has been acting in good faith, that could minimize any reversals’ velocity as we’re currently seeing in the federal government.

Possibly the best way to achieve a fair map would be through an open-source algorithm. Genetic algorithms are effective at meeting the basic requirements for drawing these maps. Numerous free and open-source programs exist on the market. The algorithms can compare 10s or 100s of thousands of maps (or more) in minutes and select the fairest with objective redistricting criteria. It will look like the public expects district maps to look – compact and not reflecting underlying demographics.

My research has found we’ve known how to do redistricting computationally since the 60s. Maybe we weren’t aware of that before, or the computational power wasn’t up to it. Now, the only reason not to find an algorithmic optimization is if there is an intention to draw a gerrymandered map.

Any consideration of underlying demographics beyond population count will inevitably lead to justifiable accusations of gerrymandering. I have personally worked with redistricting software and found that to be the case.

Most people don’t consider the second-order effects of trying to draw fair maps manually. Opportunity districts inevitably backfire when they find that surrounding districts become more radical, and the opportunity representative ends up without a voice or support among their peers. And when those gerrymandered districts tip to the other party, there’s no ethical argument to try and get them back.

From a practical point of view, an algorithmically drawn map would save time and money for the state in procurement, litigation fees, and legislators’ efforts.

Should the committee be open to considering additional innovative reform approaches, multi-member districts would enfranchise and engage the most Texans. They would enable rank-choice voting, which is possibly the only process that could reverse the progressively worse partisanship that’s led to worse gridlock, dirty politics, and loss of public confidence. It could help Texas lead the nation in voter representation rather than voter suppression.

In sum, I would like to encourage the redistricting committee to do their best to let a computer draw a fair map this time – for their own long-term interest, if not the public.