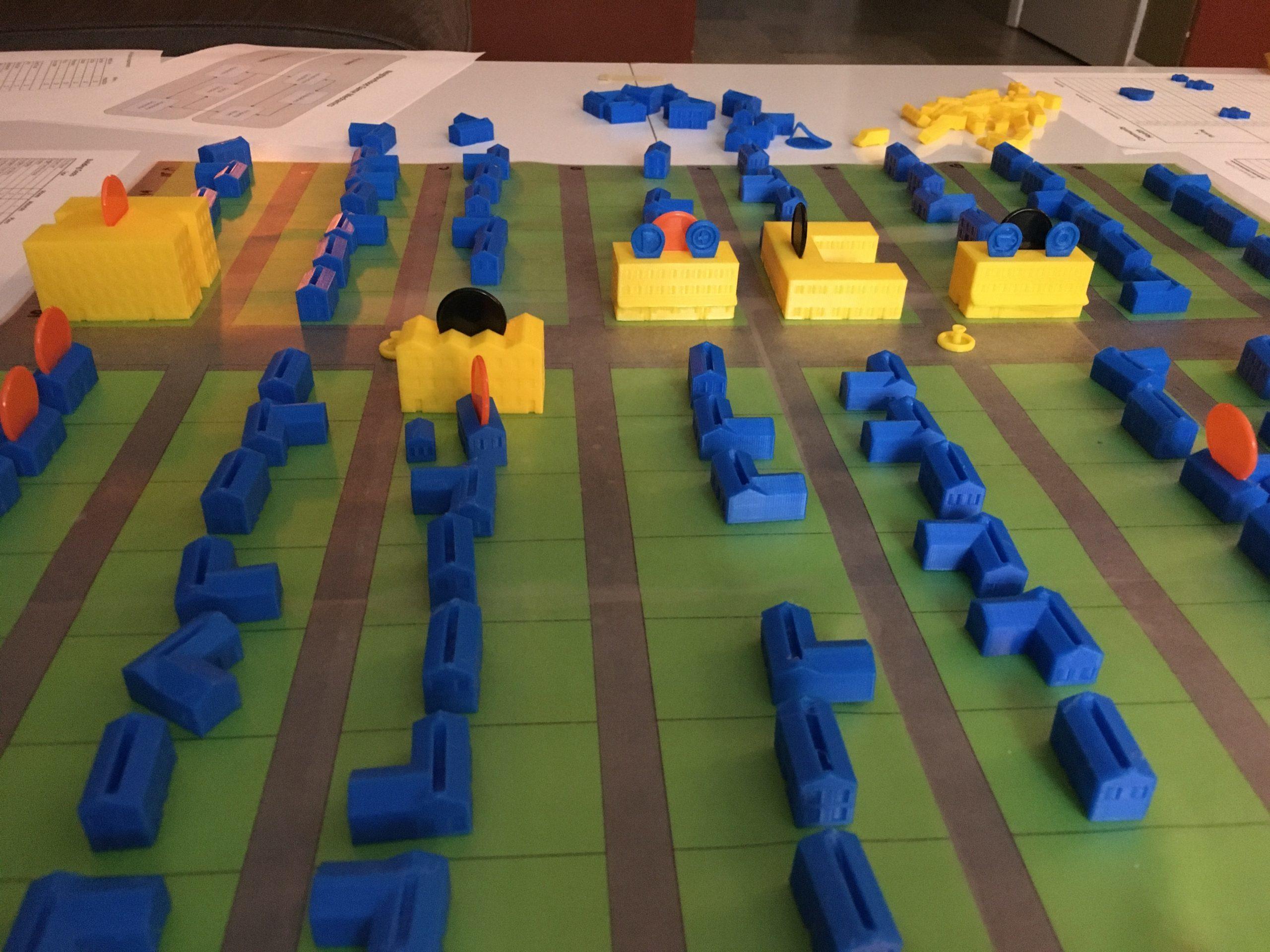 I finished printing out a set of pieces, wrote some rules, and we finally began playtesting.

The goal of playtesting is to figure out what adjustments you need to make to make the game work better. See where the sticking points are. Figure out if the game is unbalanced for certain players or strategies. At some point, to do this rigorously enough you have to use spreadsheets or code.

For now, I just wanted to see if the rules made sense and how long it would take to play it. Did players need fewer or more options on a turn? Did the metrics make it possible to win or lose?

We have played 3 times now:

Each time, we spent about 3 hours playing and didn’t finish. The good news is that the metrics seem to be measuring the right things. We had good conversations about investment and city policies.

What we found though was that to play from the beginning to end might take 6-8 hours. After that, I sat down with Jerry Robinson on our board who has extensive experience with product development and playtesting. We can to the realization that keeping track of important elements including equity accumulation, taxes, and amenity clustering bonuses are going to require a companion app.

With that in mind, here are the end states of the 3 games we played and some discussion:

To outline what you’re seeing:

What we learned from this game was that we jumped from single-family directly to 3-story buildings. It took forever to get policies passed and we stopped with less than half accomplished.

We thought next it might go faster with more players so we invite a couple of friends over. What we found was that the “investor” player accumulated capital much faster than the rest of us. As the “advocate” player, I ended up trying to pass all the policies myself.

In the end, we couldn’t pass enough policies and we all ended up with a bunch of cash, nothing we could build, and nearly losing because we let the infrastructure degrade instead of investing in the community.

Some of the lessons from the second game:

We went back to two players to see how long it would take us to finish the game. We started in a state where all the policies had already been passed and only loosely used the scales. Mostly I was still trying to see if the population scale was moving appropriately with new development.

These last lessons were what Jerry and I discussed. We’re really going to have to develop an app to keep track of all the pieces. The next step then is to put everything that’s not on the board into the app.

Fortunately, I’m not starting from scratch. A few years back, I coded out the spreadsheet for UrbanPlan. That’s the real estate development simulation the Urban Land Institute does. I saw that students were getting stuck on the spreadsheet because ever time they changed something on the site, they would have to recalculate several things that could take 5-10 minutes. The feedback was delayed and disconnected.

For now, that’s what I’ll be focusing on with the game.