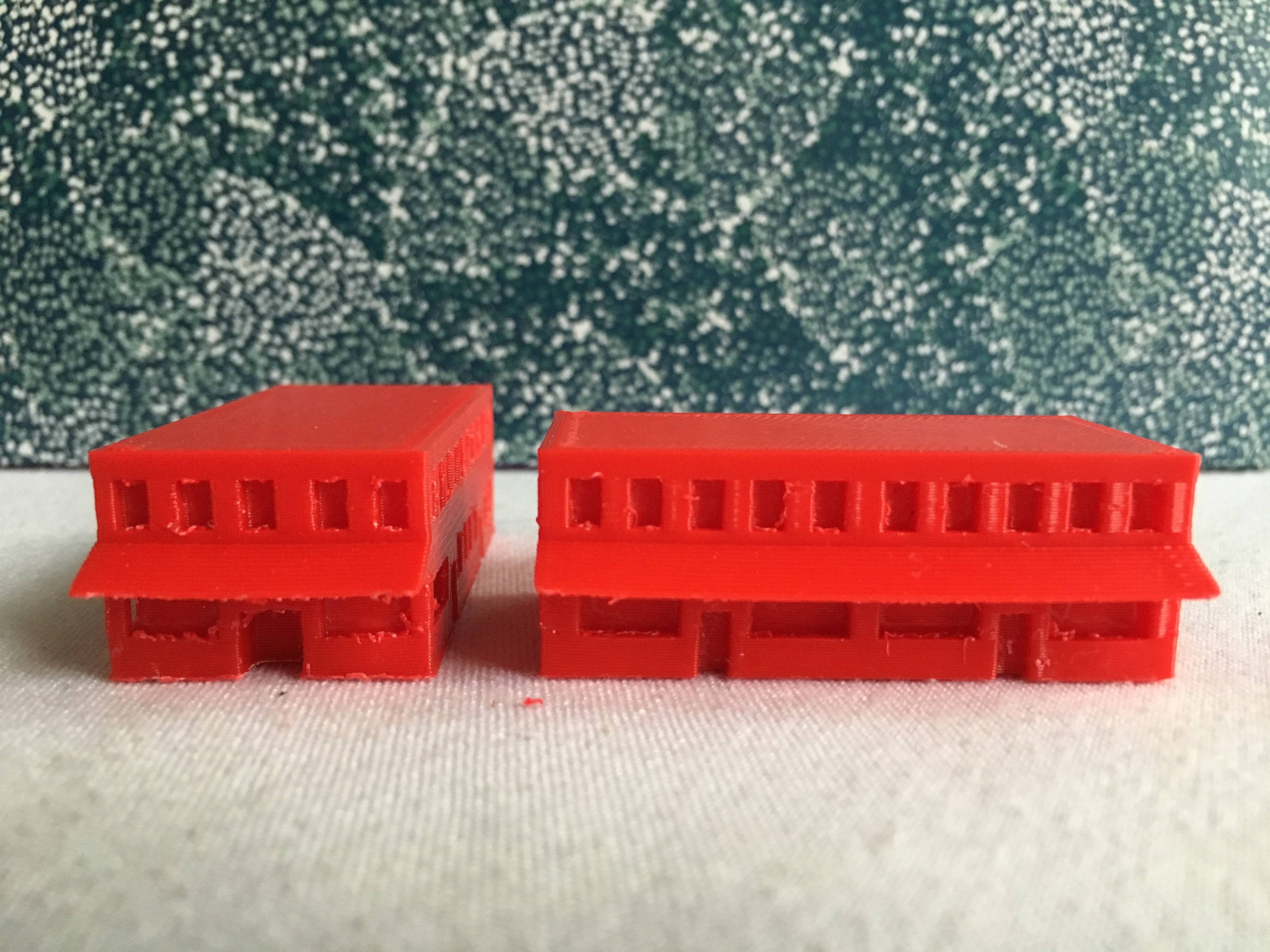 For the game I’m developing, I’m prototyping a selection of the different building types available from the Missing Middle housing types.

I’m trying to capture the essence of these dynamics in the game. I’m partial toward fourplexes for a number of reasons I wrote about earlier. Accessory dwelling units (aka tiny houses, ADUs, granny flats, backyard cottages, etc.) are also going to be important.

For the setup I used TinkerCAD which was recommended by our local library. Then you can print there for something like $0.10/gram. The entire red set was about $7. You don’t get to pick the color at the library so I have red and black right now. Once I get the pieces mostly settled, I’ll print through a print-on-demand service such as Shapeways.

The challenge of the game has been in finding a meaningful scale. I started with the premise of the 10-minute neighborhood. As far as I can find, Leon Krier was the first to talk about that in his book The Architecture of Community. The idea is that you should be able to walk to all your daily needs within a 10-minute radius. Ideally, that would include your job. If you are self-employed or work from home, that works. If you commute to a large corporate office, not so much. But at least most of your daily life outside of work would be walkable.

A 10-minute walk is somewhere between a half-mile and a quarter-mile for most people. I first looked at what scale it would be if I put a square mile on my 36″ diameter kitchen table. It would have made the 32′-wide single-family house I was planning to make about 1/4″ wide which was too small for a playing piece.

I took a screenshot of my own neighborhood to think about the scale of the game board tiles. I had in mind a Settlers of Catan style set-up where you lay out tiles to build the board.

What I thought would work best for a first test is 3″ tiles covering two average-sized parcels that include the alley and street between them. An 8×8 grid would give 64 tiles. A board of only residential parcels without any major through streets would be 128 parcels. That’s probably big enough to get a general idea. It’s not a half-mile across but it’s still about 13.5 acres.

Additional challenges will be having commercial parcels, major thoroughfares, cul-de-sacs, etc. The actual metrics of the game are still percolating.

My first printing was a city block that was 1″=100′ scale. It was too small as a game piece but I had already built it as a 3D model so I just wanted to see how the printing resolution worked.

My next run was patterned on Jon Anderson’s Form-Follows-Finance Fourplex (4F). I was working on getting the dimensions and wanting something I could put on a building site to evaluate development possibilities. Since the building was approximately 32′ wide, I made the scale to be 1″=32′. That scale also allows you to easily make smaller increments since 16’=1/2″ and 8’=1/4″. If I wanted a 10-foot floor, I just estimated.

Next, I mixed it up with some live-work and townhome-style buildings. I even prototyped out a 1.5-acre site to see if the $750,000 asking price could be justified. With the parking requirements, it might just be but it would be a squeeze.

Finally, I printed more Missing Middle types. Aside from the 1 and 2 story single-family homes, I made pieces that add ADUs, an ADU bungalow court, a duplex, triplex, fourplex, townhomes, and put awnings on the 4F-style buildings.

What I realized is that roof overhangs don’t work very well, that I need to be careful about making the windows too deep, and that I need to make the ADUs their own separate pieces. Additionally, I need corner buildings, different townhomes, more 3-story types, 1-story retail, strip shopping, food trucks, and tents. I may attempt a courtyard apartment but that would be a stretch.